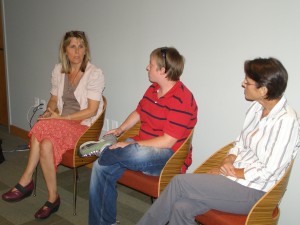 We all have ideas about how difficult life might be for a child in a foster home, but the pain and the challenges become unsettlingly real in Bess O’Brien’s hard hitting documentary “Ask Us Who We Are.”   Mobius presented the documentary as part of the Mobius Mentor Support Series.  Members of the mentoring community from the King Street Center, Spectrum Youth and Family Services, Community Friends Mentoring Program at the HowardCenter, and the Boys and Girls Club attended.

The filmmaker, Vermont’s own Bess O’Brien,  led a frank discussion about foster care in Vermont, with the help of a former foster child, and a foster parent, both of whom were featured in the film.  Unlike some films that gratuitously focus on the tragedies, O’Brien leaves the viewer with a sense of hope, and a picture of resilience. The film, it turns out, is full of heroes:  foster parents, foster children, and even biological parents who do the right thing for their children. 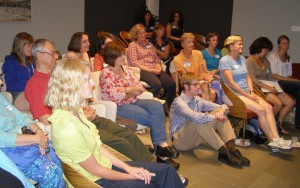 Kristen Hayden-West, of the Community Friends Mentoring Program at the HowardCenter, pointed out that the issues of foster care are relevant to mentors, both directly, as many mentees are in foster care or kinship care, and also indirectly, a point reiterated by filmmaker Bess O’Brien,   “Mentoring is about making young people feel like they belong, like they have a friend, a person who believes in them.   Belonging is a strong theme in my film, and one that all foster care children search for.”

“Mentors are not only important people to the children they work with.  They play a valuable role as members of the ‘Villages’ who help raise these children,” according to Robin Roberge, a foster parent for 18 years  who is featured in the film.   “As a foster parent, I treasure the time and love my children’s mentors give to them.”

Robin’s participation along with that of former foster child Jessica Edwards, gave mentors the opportunity to ask heartfelt questions in a very lively and poignant discussion. 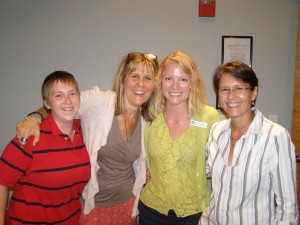