Mentoring Success Could Be Contagious, If You Allow It 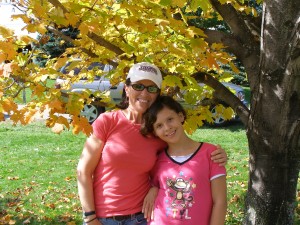 Sheila Fazackerly’s world revolves around young people, and she cordially invites you to make a difference in the life of one child.  She is a para-educator at Champlain Valley Union High School, and in her spare time – she is a mentor through HowardCenter’s Community Friends Mentoring program.  She has been matched for about a year with an eleven-year-old, who has enjoyed their adventures with the Mobius Card at places like the Shelburne Museum and the Cairns Arena.  “ My mentee tried ice skating for the first time at Cairns Arena,”  says Sheila, “and she was soon running rings around me.”

The pair enjoys a myriad of activities including art projects, movies, bowling, apple picking, and just spending time together at Sheila’s home in East Charlotte.  They play the piano and take the dogs on walks over the covered bridge.

It was through a chance meeting with Mobius Executive Director Andrea Torello that Sheila decided to become a mentor.  It is a choice Sheila Fazackerly is glad she made.  “To share life’s joys with a child is a gift and I am very thankful to have been given the opportunity.”

Sheila is concerned about her mentee’s younger brother, who is nine years old.   She says he desperately wants a mentor.  There are many children like him on waiting lists.  Mentoring programs around the region  are waiting for caring adults to volunteer to become mentors.

Sheila Fazackerly would love to see you join the family of mentors in our community.  “I would urge anyone who wants to make a difference to give mentoring a try! It’s really rewarding to be able to be there for a kid who doesn’t have the same opportunities as some of his/her peers.”

If you are not already a mentor, we’d love to share more information and get you on the road to becoming a mentor.  Are you up for it?