The Boys Are Back! 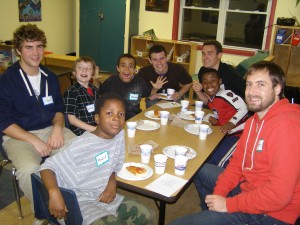 Pizza and  ‘getting-to-know-you’ were on the menu for the first meeting of the new Just For Boys program at the King Street Center.  Just For Boys, a site-based program at the King Street Center, is officially underway again after a brief hiatus due to lack of funding.  In July we blogged about King Street’s plans to revive the popular program with additional funding from the Amachi Mentoring Coalition Project grant,  which Mobius shares with six Vermont mentoring programs, including King Street.

“We are so excited to see this group of boys matched with dynamic male mentors. The group is hitting it off already!” says Julie Thompson is King Street’s Just For Boys coordinator.

“Just For Boys is so cool!” says Malcolm, age 9.  Ben Danowitz, Malcolm’s mentor says being with the boys dissolves the stress of the work week, “This totally negates all the work I have to do all week–it is awesome!” 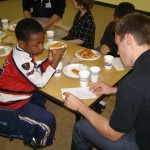 To help the pairs get to know each other, Julie had them play the “M&M game,” in which they had to answer a question for each color M&M they got.  They were questions like “what is your favorite food?” and “name an activity you’d like to do with your buddy. ”  They also brainstormed some things they  hope to do as a group in Just For Boys.   Upcoming activities include soccer, making homemade pasta, rock climbing, and a visit from Aikido of Champlain Valley.