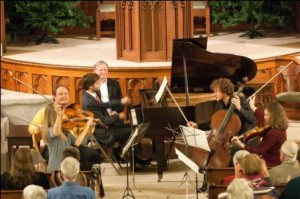 A nod of the head, a flick of the wrist, a breath – for a piano quintet those gestures communicate.  They signal more than tempo and “let’s begin.”  They confirm a unified effort, an agreed upon interpretation of the music being played.  A fine chamber music performance reaches the highest levels of human collaboration.  The result is transcendental.

As I listened to the excellent performance by the Burlington Ensemble at their 90/10 Series concert featuring Mobius, I thought about how collaboration has brought mentoring to so many young people in our community.  The result is transforming for the mentees, but also for the mentors. 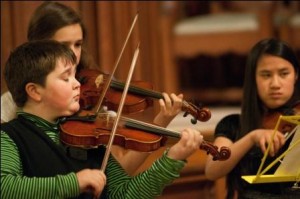 The turnout for the concert was exceptional for an evening of treacherous driving conditions.  The concert, titled “Mentors” appropriately featured music of Robert Schumann and the young composer who sought him out to be a teacher and mentor, Johannes Brahms.   Two of the most beloved piano quintets in the repertoire, along with the wonderful acoustics of College Street Congregational Church enticed music lovers to brave the elements.   The intrepid concert goers and supporters of mentoring were rewarded with top notch performances of both pieces.  An added treat was a very nice performance by some young players from the Vermont Suzuki Violins to open the second half.

The concert itself, part of BE’s 90/10 series,  is the result of a collaboration between the Burlington Ensemble, the College Street Congregational Church,  and six non-profits including Mobius, as well as several  corporate sponsors.  With Mobius as the featured organization for this concert,  Mobius Executive Director Andrea Torello took the opportunity to let the audience know about the music we make at Mobius – ringing the “New Mentor” bell every time someone new is recruited. 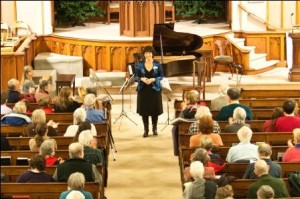 The Burlington Ensemble is made up of local violinists Michael Dabroski and Sophia Hirsch, and friends.  For this concert the other members of the ensemble were local violist Elizabeth Reid, and cellist Benjamin Elton Capps and pianist David  Kaplan (both of whom came from New York to play the concert).  They make music with a mission to  make a difference in the community. They take their highly refined artistic collaboration and turn it into contributions to the partner six non-profits.