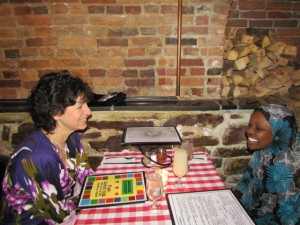 Andrea and Hawa at American Flatbread

American Flatbread might best be known for its focus on healthy delicious food and its support of  local farms.  But in the mentoring community they are also known as a favorite spot for mentor pairs to dine.  As a Mobius Mentoring Card sponsor, they offer 50% off for mentor pairs that dine there.

That is only one of the ways American Flatbread supports mentoring in our community.  For the fourth year in a row America Flatbread Burlington raised money for mentoring by having a benefit “bake” during National Mentoring Month.  This year they raised  more than $500 to support mentoring.

Supporting mentoring is in line with the mission of American Flatbread, which is “to provide good, flavorful, nutritious food that gives both joy and health, and to share this food with others in ways sustainable to all.”  They have a philosophy of being a good neighbor and an education resource. 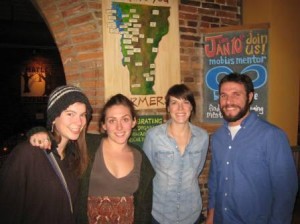 “The Mobius movement is a wonderful program that we love to support. It’s for kids, it’s about supporting local mentoring movements, and it benefits others in the community,” according to American Flatbread manager, Emily Bellmore.  But for her, it is probably even a bit more personal than that, because she has been a mentor with the Boys and Girls Club for more than three years.

There are many ways to support mentoring in our community.  The best way to begin is to become a mentor.  You’ll love it, and Mobius would love to get you started. Join@mentorvt.org.