‘Mr. Watson–come here–I want to see you.’   Those words are from one of the most famous ‘aha!’ moments in American history.  Alexander Graham Bell recorded the event in his notebook on March 10, 1876, how he spoke into his invention, and his assistant, Thomas A. Watson, heard Bell’s now-famous words through Bell’s invention in the next room.  The rest, as they say, is history (and we all now have data plans).

My ‘aha!’ moment as a mentor may not influence the course of history, but for one adult and one young person it has great significance.  For me, as a mentor, the question  “have you found your big plates?”  was like a big chime ringing.  My mentee was asking if I had yet located the box with my dinner plates, since my recent move.  I had completely forgotten that I talked to her about not being able to find them.  I had mentioned it a few weeks earlier in chit-chat in the car, on the way to a restaurant, or some mentoring activity.  Her question prompted the realization that what I say to my mentee is important to her.  She remembers little things that I would have considered trivial. 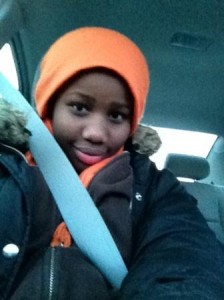 Johara took this photo of herself with my phone while I was driving. Some of our best conversations happen in the car.

I can’t stop smiling when she brings up previous conversations.  “Remember when you got a ticket and George got mad?”  She giggles and I giggle.  What she is saying is that we were making a connection.  What a gift that is to me!

Have you had an ‘aha!’ moment with your mentee?  With your program?  We’d love to share it.