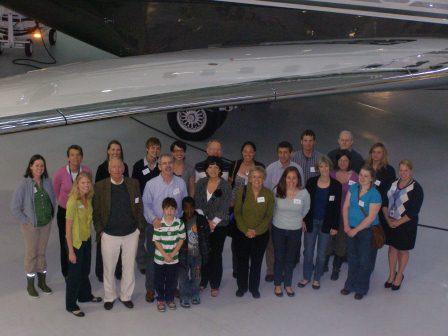 “I don’t think there can be a higher calling,” said Mobius Board Member Toby Knox about mentoring.  Toby offered words of inspiration to a group of fellow mentors at the launch of the Mentor Ambassador program.   Twenty mentors from seven programs have agreed to be Mentor Ambassadors.  Toby charged each one to think of every person they know, and reach out to them with the reality of mentoring – that’s it is not hard, that it is really fun, and that we all have the skills to be good mentors.

The Mentor Ambassadors will recruit mentors May through August, each with a goal of recruiting at least two each month.  Heritage Aviation, a Mobius partner, hosted the launch and orientation, which began with a group photo in the hangar.  Mobius Executive Director Andrea Torello opened the orientation with thanks to Heritage, as well as to Sp!ke Advertising, who donated the creative for the U and I are Mentors campaign, the ammunition with which the Mentor Ambassadors will recruit their family, friends, and colleagues.   She also thanked Jane’s Trust for funding the implementation, which includes three videos, each featuring a Mentor Ambassador and his or her mentee.  Most importantly, Andrea thanked the inaugural troupe of Mentor Ambassadors who are breaking new ground in mentor recruitment, as the first to implement the research based, professionally designed recruitment techniques Mobius has worked on for the past three years.

Whenever a group of mentors are together in one room, there is inspiration in the spontaneous sharing of stories about their mentees.   The launch was no different.  Sarah Soule recounted taking her mentee, Makayla, on the ferry.  Makayla had never been out of Vermont before, and she was really excited to take the ferry to New York.

Sharing stories like that is an effective way to convert potential mentors.  The three videos for the U and I are Mentors campaign are made to help recruiting efforts by reaching web visitors with the experiences of Boys and Girls Club match, Mark Redmond and Sharmarke  King Street pair, Sarah Soule and Makayla, and Connecting Youth Williston match Sam Messer and Ricky.  The first video will be released on May 17th.

In the first of the three videos Mark and Sharmarke recall a bass fishing trip.  For Sharmarke a highlight was the fast boat ride.  He says in the video “I felt like I was flying.”   As mentors we often feel like we are flying, and sometimes it only takes a smile from a mentee to give us flight.   It’s not too late to become a Mentor Ambassador.  Please join us in our effort to recruit 150 mentors by the end of our campaign on August 17, 2012.  Go to [email protected]