Mobius Board is Ready to Recruit Mentors 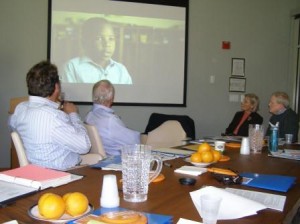 The Mobius Board was captivated by the video of Sharmarke and his mentor, Mark Redmond.

The  U and I are Mentors campaign got underway full steam ahead last week, when the first of the three videos went up on the Mobius website.  That same day the Mobius Board met, and Board Member Toby Knox set out to incite his fellow Board Members to become Ambassadors, and take up the challenge for each to recruit at least six mentors over the next three months.

Toby is a marketing professional, who chairs the Board’s Public Awareness Committee.  He was involved from the beginning of the development of the campaign, and signed up to be an Ambassador right away, as did fellow committee member and Board Member Mint Dole.  All fired up, Toby was adamant that the other Board Members should become Ambassadors.  With some compelling help from the new video, Toby convinced an additional seven board members to make the commitment. 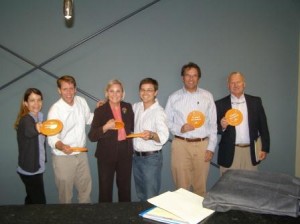 Mobius Board members get their Mentor Ambassador kits, which include U and I are Mentors flying discs.

Mobius Board Members are great examples that even the busiest people can make time to recruit more mentors.  Toby serves not only on the Mobius Board, and Public Awareness Committee, but he also mentors for Everybody Wins! Vt, and he serves on the Community Advisory Council of Vermont Public Television.

Other Board Members who have taken up the challenge include Sascha Mayer, Dan Smith, Helen Riehle, Michael Loner, Larry Williams, and Bill Romond (all pictured here), as well as Jami Rivers.

The U and I are Mentors campaign was designed by SP!KE Advertising and the implementation is supported by a grant from Jane’s Trust.