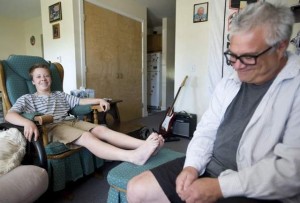 Ken, Millman, President of Sp!ke Advertising and his mentee, Aaron. This photo by Emily McManamy is on the front page of the Innovate section of the Burlington Free Press.

Did you see the great article, “Taking Time to Care,”  in the Burlington Free Press?  Reporter Dan D’Ambrosio and the Free Press really put the spotlight on mentoring, devoting six pages in the online version, and including four color photos in the print version.  It illustrates not only their editorial wisdom that mentoring is deserving of this kind of time and editorial real estate, but it is also another example of how the Vermont Media support mentoring.

Dan D’Ambrosio was there at the beginning, when Sp!ke Advertising chose Mobius to win their Advertising Gone Good grant of $50,000 worth of their creative genius.  Since the launch of the U and I are Mentors campaign WJOY’s Ginny McGehee and Star 92.9’s Breakfast Club (Tim Kavanagh and Mary Cenci)have broadcast interviews with mentors.  The Colchester Sun and Essex Reporter ran a profile of Mentor Ambassador (and Spectrum Executive Director) Mark Redmond.  The Other Paper did a great article on the Ambassador Launch. Mentor Ambassador Sarah Soule was a guest of The :30 on WCAX with Kristin Carlson.