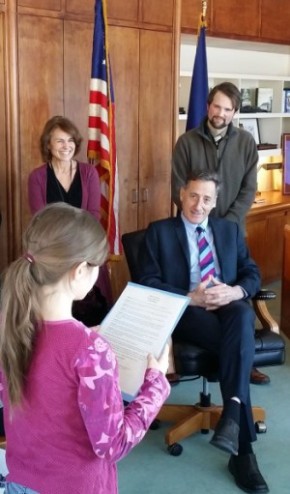 On Wednesday, January 22, we partnered with Governor Peter Shumlin to officially recognize January 2014 as National Mentoring Month in Vermont.  This proclamation marks both the culmination of Mobius’ first year as Vermont’s Mentoring Partnership, and our first year organizing a statewide public awareness campaign.

Throughout the month of January, we partnered with youth mentoring programs, funders, and legislators to highlight the positive benefits of mentoring and recognize the efforts of volunteer mentors across the state. Local and statewide businesses have also stepped up to show their support. Comcast acted as our first statewide media sponsor, and many local restaurants collaborated with Mobius and/or programs in their region to raise money for the mentoring cause.

On Tuesday, January 14th, more than 40 mentors and mentees joined mentoring staff and supporters from across the state for a celebration at the Statehouse. State Representative Anne Gallivan, a mentor through the Mentor Connector in Rutland and Mobius board member, led the reading of a National Mentoring Month resolution, and recognized the group on the House floor. You can read the full resolution and Anne’s remarks here.

The mentoring movement in Vermont is strong, and it is because of the support of people like you that we are able to continue building momentum for the cause. There is much to celebrate, but there is still much work to be done. Based on the results of The Mentoring Effect, a study released last week by MENTOR, the National Mentoring Partnership, 1 in 3 young Vermonters will grow up without experiencing a naturally occurring or structured mentoring relationship. We now believe that there are still more than 15,500 young people in Vermont who are in strong need of a mentor.

Thank you to everyone who helped make Vermont Mentoring Month 2014 a resounding success!  We look forward to continuing our important work with you during our second year as Vermont’s Mentoring Partnership.