Success for Mentoring at the Vermont Statehouse 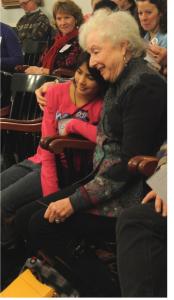 The Vermont mentoring community continues to grow, and our state legislators have taken notice. We had a great time last Thursday celebrating with more than 90 mentoring friends near and far, our 2015 Vermont Mentoring Month Spokesperson Madeleine Kunin, Governor Shumlin, and the Vermont House and Senate.

Madeleine thanked all the mentors for their service, offered words of encouragement to mentees, and celebrated the power of each mentoring connection between an adult and a youth. She ended the day feeling as inspired by the mentor pairs she met at the event as they were by her, later reflecting: “I sensed the love and generosity of spirit that permeated the room.”

Current Vermont Governor Peter Shumlin took to the podium next to offer his own message of gratitude to everyone involved with mentoring (mentors, mentees, and program staff alike). The real star of his appearance, though, was 11-year-old Girls/Boys First mentee Anna Farber, who gave a flawless reading of the Governor’s proclamation officially recognizing January 15 as National Mentoring Month in Vermont. After the signing, she also took home a souvenir—the Governor’s pen.

After lunch in the statehouse cafeteria, mentors and mentees filled the House balcony as the House and Senate showed their support with a National Mentoring Month resolution read aloud on the House floor. Representative Leigh Dakin (Windsor-3-1) recognized the group and offered her own words of encouragement for their service and participation in the event. 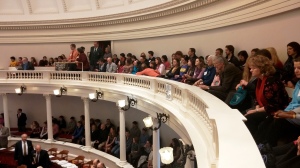 ul for mentors and mentees to be recognized and appreciated for what they offer our mentoring program,” reflected Sarah Sanville, who coordinates the JUMP Mentoring Program ( a program of Northeast Kingdom Youth Services).

The event concluded with complimentary statehouse tours for mentors and mentees, a wonderful educational experience for youth and adults alike. Mentor pairs came from as far north as St. Johnsbury, and as far south as Bennington, to join in the festivities. 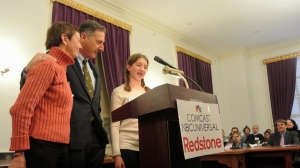 Jennifer Grant, executive director of Windsor County Partners, added: “Experienced political leaders recognize that mentoring is key to addressing issues in our society. Bringing together programs and politicians will help ensure that mentoring becomes available not only in selected towns, but across the state.”

Thank you to everyone who participated in the statehouse celebration and helped make it an awesome event! You can view all the fun on our Facebook album. While the statewide festivities are wrapping up for the month, Mobius is working to take our statewide mentoring message to the national level. Check back next week for a post about our experiences at the 2015 National Mentoring Summit, including meetings with the offices of Sanders, Leahy, and Welch.