The morning began with remarks from Ken Schatz, Commissioner of the Department for Children and Families, and Al Gobeille,

Secretary of the Agency of Human Services. Gobeille’s remarks reflected on his own personal life experiences, and the undeniable impact that extra adults outside of his family had on his going on to become a successful adult. He noted as well that the best job he ever had was coaching football, and getting to see a group of young boys grow into young men over the years. These young men brought to the field with them everything that was going on in their lives, especially at home. Gobeille expressed how important it was to him to try and be that extra person in those young men’s lives. Many of those young men went on to work for him down the road. His words reinforced a particularly important theme in mentoring and the world of health professionals today: kids absorb the stress of adverse experiences in their households and communities, and it can have an immense impact of what their adult lives look like (physically and mentally) if it is not acknowledged and addressed.

We are incredibly grateful that David Shapiro came up to Vermont to be with us Monday morning and be our keynote speaker. 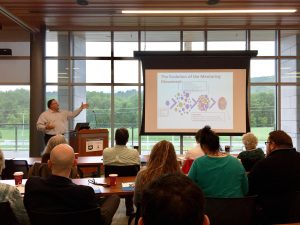 Shapiro discussed MENTOR, the current scale of the mentoring movement and how the mentoring movement has evolved, as well as the need for mentoring and the impact that it has. “The work MENTOR does is only possible because of our affiliates, and the work they are doing in their states,” Shapiro said. He also put meaning back into the one-in-three statistic that we so frequently find ourselves telling people. One in three young people don’t have any adults in their lives, beyond their immediate family, that they can rely on or turn to for support. That is an incredibly isolated and lonely place to be as a child or young adult. The need for mentoring is tremendously important, and the work that mentoring programs are doing to help connect youth to caring adult mentors is priceless when it comes to the impact it can have on a young person’s life.

The rest of the morning included the first workshop session, which included three workshop options: 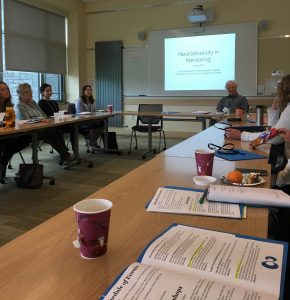 “Neurodiversity in Mentoring,” “Post-Secondary Opportunities Besides College,” and “Fundraising: You Can Do It!” “Neurodiversity in Mentoring” was led by Brad Smith, executive director of the Vermont Learning-Support Initiative, and Corey Richardson, an adjunct faculty member at both UVM and Champlain College. This workshop explained neurodiversity, and focused on creating more awareness and understanding of the neurodiverse community and how to bring that understanding into mentoring programs. “Post-Secondary Opportunities Besides College” was led by Liz Schlegel, executive director of The Alchemist Foundation, and explored the post-secondary opportunities for youth in Vermont other than four-year college. “Fundraising: You Can Do It!” was led by Joyce Cellars, associate of CPG Enterprises, and focused on helping individuals feel comfortable with and confident in fundraising for their programs. 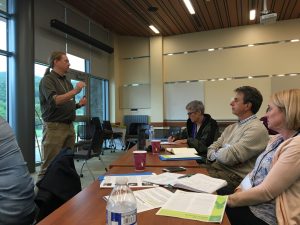 Program Successful.” “College Access and Support” was led by Liam Danaher, student engagement coordinator at Vermont Student Assistance Corporation (VSAC), and explored strategies for how to best support mentees who wish to pursue college, and helping them be successful once enrolled. “Adverse Childhood Experiences” was led by Kathleen Hentcy, mental health & health care integration director of the Department of Mental Health. This workshop included a viewing of the film Resilience, and a panel discussion with Chris Hultquist (The Mentor Connector), Tricia Long (Lamoille Restorative Justice Center), and a representative from the Department for Children and Families. “How to Make Your Mentoring Program Successful” was led by Bobbi Jo Stellato, program director of The Mentor Connector, and included helping those who were newer program staff figure out where to focus their efforts so that their program will be successful.

The larger group facilitated discussions included “Life After High School,” facilitated by Chad Butt, Mobius’ executive director, and “ACEs: What Do We Do Now,” facilitated by Kreig Pinkham, director of the Washington County Youth Service Bureau. These discussions gave those in attendance an opportunity to dive deeper into the two tracks that the Symposium focused on: post-secondary opportunities, and ACEs.

The day concluded with Chad giving the “State of Mentoring in Vermont” address, providing useful data on the numbers and types of programs, while also highlighting current needs and gaps.

Thank you to everyone who attended, our dedicated and knowledgeable presenters, David Shapiro, Ken Schatz, Al Gobeille, and our sponsors, for making this day possible. 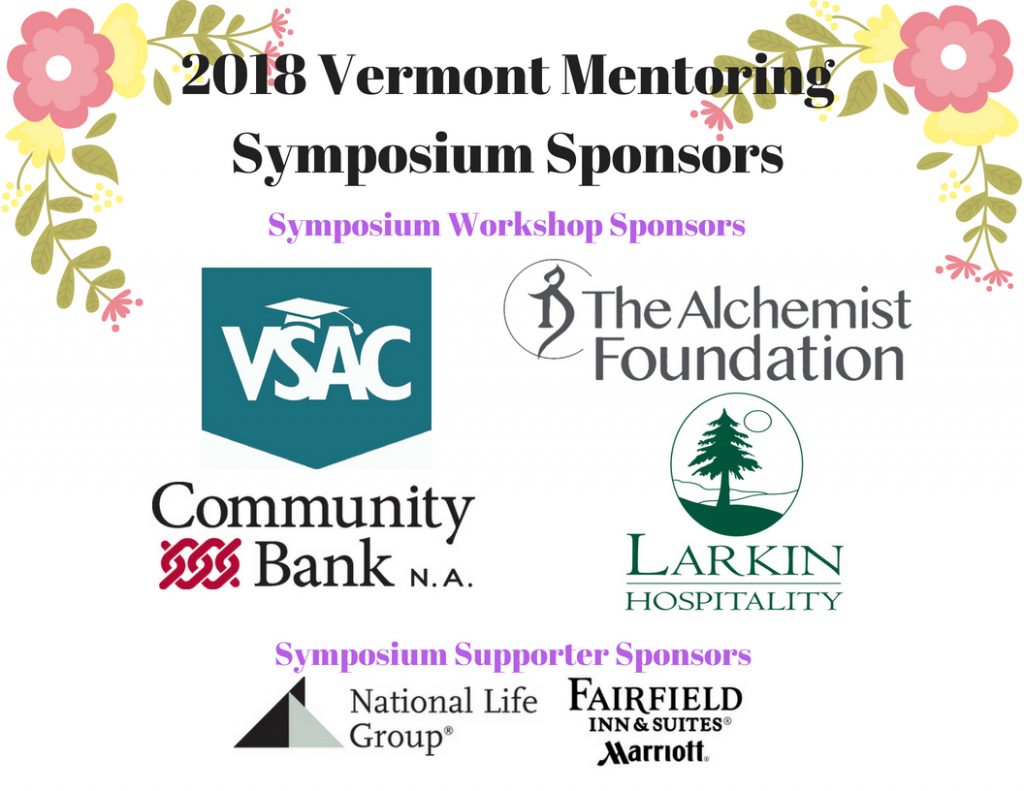