Representing Vermont in Our Nation’s Capitol

At the end of January, Benji, Chad and 11 mentoring program leaders from Vermont traveled to D.C. for the 10th annual National Mentoring Summit! Benji and Chad were joined by Gabriella Tufo Strouse (King Street Center), Erika Linskey (Safer Society Foundation), Marianne Hunkin (Watershed Mentoring) for Capitol Hill Day. They met with congressional staff members from the offices of Senators Leahy and Sanders and Congressman Welch to talk about the importance of federal funding for youth mentoring programs and the great work local programs are doing to support youth in Vermont. It was a great opportunity to personally thank Senator Leahy’s team for their work to help expand the grant criteria for the Office of Juvenile Justice and Delinquency Prevention’s (OJJDP) Youth Mentoring Grant to support rural mentoring states and mentoring programs and communities affected by the opioid crisis.  Because of this change, and with all three members of the delegation supporting our application, MENTOR Vermont and the Vermont Department for Children and Families were recently awarded a three-year, $1.25 million grant to expand mentoring programs in rural communities hardest hit by the opiate epidemic.

The main portion of the Summit was kicked off by a rousing interview of Olympic Medalist Ibtihaj Muhammad led by her youth “mentor” and featured a variety of workshops led by mentoring and youth development professionals from around the country. You can learn more about the National Mentoring Summit by visiting MENTOR’s webpage about the event. 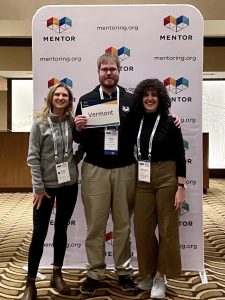 Erika and Marianne were able to attend the Summit because they received scholarship funding from MENTOR Vermont and the A.D. Henderson Foundation that covered their airfare, hotel, and entry to the conference. It was a great professional development opportunity and both of them came away with lots of useful information to bring back to Vermont and apply within their local programs.

“Attending the 2020 National Mentoring Summit in Washington DC was an eye opening experience,” said Erika. “Being introduced to other mentoring programs from across the nation provided fresh perspective and reinforced just how much we are all in this work together.”

“Because of this scholarship, I was able to represent Franklin County at that National Mentoring Summit,” said Marianne. “The summit gave me an opportunity to connect with other mentoring programs in Vermont and across the nation. Many of the youth speakers encouraged me to think about how to incorporate youth voice in mentoring. The sessions that were provided expanded my knowledge on important topics such as equity and inclusion, supporting trans and gender non-conforming youth, trauma-informed practices for mentoring, and supporting youth affected by the opioid epidemic. I am really excited about being able to share this knowledge with our dedicated mentors!”

Next year’s National Mentoring Summit will take place January 27-29, 2021. Learn more about this year’s event and check back for updates on the 2021 Mentoring Summit by visiting MENTOR’s webpage.