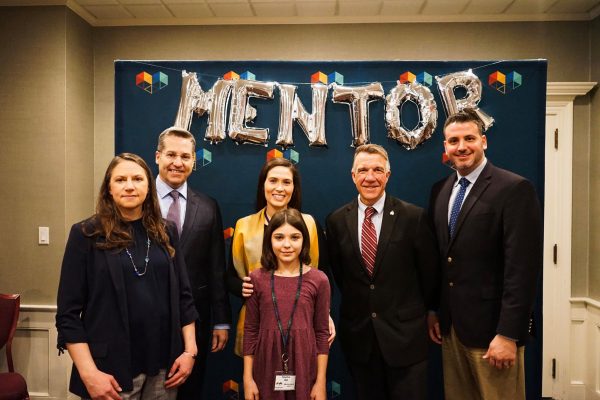 Kasia was named the 2019 Vermont Mentor of the Year by Comcast and MENTOR Vermont at the annual Mentoring Celebration at the Statehouse in January 2019. Kasia and Sophie have been paired together for two and half years through United Counseling Service’s Mentoring at UCS program.

Kasia has now been a mentor in United Counseling Service’s Mentoring at UCS program (formerly known as the Northshire Big Brothers Big Sisters program) for more than two years. She has developed a loving, trusting, and nurturing relationship with her mentee, Sophie, who will be the first to tell you what a difference Kasia has made in her life.

Kasia is vibrant, compassionate, intelligent, and loving and it is my belief that anyone who knows her would wholeheartedly agree. This match meets on a regular basis, as Kasia understands the importance of consistency, engaging in such activities as interacting with animals, swimming, playing games, and listening to music. She attends all special events and trainings, documents immediately following a match meeting in the Vermont Mentoring Database, and is the first to volunteer for anything and everything!

Aside from being a mentor, Kasia also serves as a member of our Advisory Council and presents a database training to new mentors. She is a most valuable reference when I am attempting to find resources for new trainings to present, and ALWAYS invites and transports other mentees to join her and Sophie when their mentors cannot attend a special event.

Kasia also provides a positive impact in our educational community as a special educator at our local elementary and middle school. Any student that you speak to from there has nothing but positive remarks in regard to their encounters with her. Kasia’s role at the school also enables her to identify the children in most need of a mentor.

I cannot express enough how grateful and fortunate we are in the Northshire to have Kasia, not only as a mentor to Sophie, but as a dedicated member to our program and community as a whole.

Kasia was the 2019 Vermont Mentor of the Year