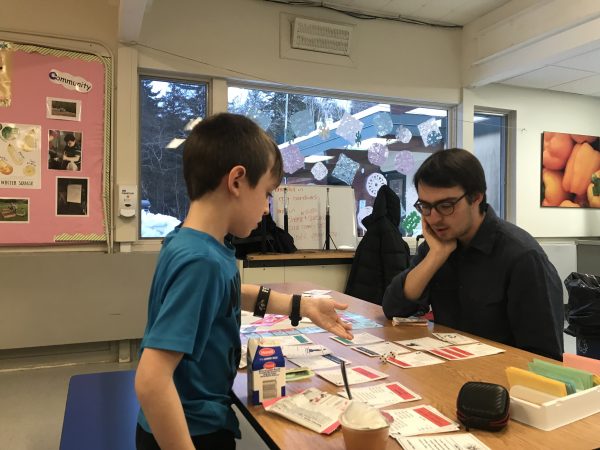 Ben and Andrew are paired together through The Collaborative.

While this mentor and mentee match is very new, they have accomplished a lot in a short amount of time. Ben’s mentee did not want to attend our Mentor Kickoff but Ben convinced him to come and their relationship has grown immensely since that first day. Andrew is very excited when it’s “Ben Day” in our after school program. During their first few meetings, Ben learned about Andrew’s love of board games. Even though most seven year olds would prefer to win, Andrew understands that he doesn’t have to win every game, and if they play again he has another chance of beating Ben.

Ben and his mentee played monopoly for at least three of their mentoring sessions and thus he created “Andrewopoly.” Ben, being a creative person, while he was out of power for a week, thought that his mentee would love to have his very own board game, about himself. During one of their most recent meetings, they created all of the properties, railroads and cards to reflect things that Andrew enjoys doing. Ben then put all of Andrew’s edits onto the Andrewopoly board.  During the first Ben Day of the 2019 year, this mentor pair will play Andrew’s very own board game.

I think that Ben should be the Vermont Mentor of the Year because not every mentor would make the connection that a mentee who enjoys playing board games would LOVE to have a board game all about himself. Ben did just that, and Andrew had a ton of fun making up the spaces and the board.  He can’t wait to take on his mentor in Andrewopoly in January!

Ben was a 2019 Vermont Mentor of the Year nominee